This weekend proved to be rather busy. I took a trip up to Tallahassee, where I went to college and where all my closest friends live. I am the maid of honor in my close friend’s wedding, and I was in charge of throwing a bridal shower. Actually, make that a couple’s shower, per her request. That was quite a feat, but more about that later. My weekend started Thursday, with laundry, packing, errands, homework, and studying for a midterm I had on Tuesday. I then worked from 8-11 Friday morning, and headed straight to Tallahassee with my boyfriend. Talk about being busy!

I arrived in Tallahassee and headed to my best friend’s apartment, where I was staying. We’ve known each other 10+ years, so it’s always exciting to get to visit with her and her sister. When I walked in, I was greeted by her roommate, a dog, 2 cats, and countless other people. It brought a whole new meaning to the phrase “Animal House!” We then went downtown to my favorite local restaurant, and came back to the apartment to have some drinks and play games. It was a late night and early morning, so relaxing still wasn’t on the agenda.

The next day we were rushing around to get all the food and drinks for the shower, and prizes for the games. The entire weekend it poured, and the weather was just awful. While at the grocery store, my boyfriend’s flip flops broke and he wiped out in the middle of the parking lot. He ended up being fine, but he was sopping wet for the shower. The shower went well, but it was one of the oddest things I’ve ever seen. Call me traditional, but I am not used to a couple’s bridal shower. This shower boasted men, women, and people from ages 15 to 65. The gifts given ranged from kitchen appliances to lingerie. Needless to say, things were a little awkward. Getting everyone on the same page was a lot of work, but it helped me perfect my skills as a hostess. What I didn’t perfect, however, were my driving skills. Tallahassee is one of those rare Florida cities that actually have hills, and the house we hosted the shower at had the longest driveway, and atop a hill, no less, that I had ever seen. Around midnight, when we left, my tired and groggy self backed down the driveway and into a little ditch. 5 people and a few pushes later, we were on the road again. 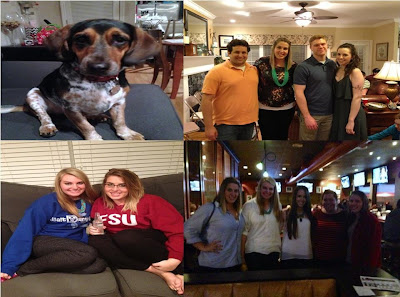 Love It or Leave It

In honor of Valentine’s Day (love it or hate it, I’m sorry!) I wanted to blog about something a little more personal to me. On Valentine’s Day, I spent the afternoon with my roommate, shopping and seeing the movie Safe Have. Run-in 1 with love. That same day, I received innumerable texts from friends. There’s run-in number 2. Over the weekend, my boyfriend came to visit and we spent a great time together. And that makes run-in number 3. My last run-in with love came on Saturday, when Joel and I met up with my family from Minnesota. They come to Orlando once a year, and I have tried, in recent years, to make sure and see them. It is my grandma’s sister and her kids, and maintaining a relationship with them, their kind words, and their lasting relationships with one another are all great reminders of love. Still, I am only 22 years old, so to say I am an expert on love would be like calling Kathy Griffin funny. However, I have been with my boyfriend for three years now, and we have plans to be married once I am out of school and on my feet. But first, responsibility calls. Still, it’s been a great three years and I’ve learned a lot along the way. With all that being said, I figured I’d write some relationship do’s and don’ts for long-term relationships based on experience. Maybe they can help, or maybe I’m too young to know what I’m saying. At the very least, I hope they entertain!

DO learn from each other! My boyfriend and I love politics but belong to different parties, and I’d be lying if I said he didn’t change my mind on a thing or two. Thank goodness for that; he’s opened my eyes and my mind, and everyone can handle a little dose of reality now and again.

DON’T read Cosmopolitan Magazine (well, sometimes, haha). I learned this the hard way, after one too many articles made me say, “Are ALL guys really like this?” I know I’d hate to think of my dad or my boyfriend the way they often paint men out to be. There is such thing at TMI.

DON’T give up due to distance. My boyfriend and I have been semi-long distance for a year and a half, and with his job search that may increase even more. If you have trust, can see an end in sight, and make time each day, it is completely doable. I always think of it in terms of the idea that it’s HIM I want, not just any guy, same city or not.

DO know that parents will always be there, so take it in stride. Even if you don’t always see eye to eye, or they don’t see how great you are, future in-laws are worth the struggle. Hopefully you can even find common ground and see the good in any situation.

DON’T go out to eat all the time! There are plenty of other ways to have fun, and you’ve got to keep the relationship REAL, too. We got in such a habit of eating out that I lost lots of money only to gain lots of weight. Yuck!

DO marry a guy who loves dogs and kids. It melts my heart when my boyfriend talks in his “puppy voice” around dogs, or when I see him playing with his younger siblings. He is one of 5, and his younger sister has Down’s syndrome, so he has lots of practice with being fun-loving and kind. That is something SO important to me!

DO make sure you have the same values. To me, marrying someone who works hard, wants kids, loves his family, and puts his faith first are non-negotiables. It’s okay to have those; there are some fissures that can’t be fused and having a solid foundation is crucial. However, once you get past the basics, my boyfriend and I are totally opposite, so don’t be too picky! (;

DON’T settle. Don’t love out of pity; don’t stay with someone if you don’t want to. If you have a lot of complaints, there is probably a reason. If you don’t see a future, don’t spend years and years stuck in a rut. Love because you want to, and because it’s a feeling you can’t help. That’s the best, and only in my opinion, kind of love that is worth it. 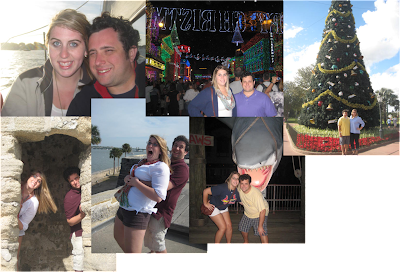 One of the most influential moments I can remember from high school happened with my favorite teacher. He taught 10th grade AP World History, and he was full of life. He expected a lot from his students, and we gave it to him, because he was fun, and kind, and respectful. As junior year slipped through my fingers, I became a teaching assistant for him. We talked and got to know each other more, and he said he came to think of me as a daughter.

So I was shocked with his response as I asked for letters of recommendation for college and beyond. The only two schools I applied to were The University of Florida and Florida State University. I ended up being accepted to both, and chose FSU. As an avid Gator fan, I expected his jeering remark of, "Why do you want to go to CLOWN college?" We laughed, and he then asked what I wanted to do, because perhaps FSU was better for my career plans. When I told him I wanted to be a teacher, he told me, with a deadpan look, "Don't do that. You can do so much more with your talents." The thing is, this didn't make me angry; it made me question myself.

At FSU, I majored in English Literature and Political Science, since reading and politics are two passions of mine. I figured I would head to law school, because surely that was a fitting career choice. But it wasn't. After one summer internship at a law office, I hated it. It was monotonous and I didn't feel that I was making a difference. Not only that, but a lawyer at the office said, "Don't go to law school. You'll hate it. Change your mind now!" So I changed my mind again. This time, however, the change was based on experience, and not bad advice.

Because, as much as I loved my high school teacher, I do think his advice was in poor taste. Now I am pursuing a Master's of Arts in Teaching, and I love it. I can share my passions with others, and touch lives. I think that is important, because it's a sad day when a teacher who seems to love his job and has the love of every student, discourages turning into him. That is who I wanted to be; he is why I wanted to teach. And I still do want to have the impact he had, and am confident I will, because I am following my dreams, and not molding myself to everyone else.

As a final note, I believe my teacher's advice also begs the questions, who can be "more" than a teacher?! Who else can give a student something that can never be taken away- an education? And who else can advocate for students who may have no one else? To me, teaching is so much more than learning about literature. It’s about putting in more effort and hours than almost any other jobs, to teach lessons of reading, writing, and life.
Posted by Emily B. at 11:06 AM 8 comments:

Taking a Bite out of Life

I am a new graduate student at UCF pursuing a Master's degree in Education. For my writing course this semester, my challenge to myself is to write a weekly blog post for 3 months through the Slice of Life Writing Project. I am by no means a writer, so this will be a true stretch for me. I am going to see what inspires me, but plan to write about anything and everything along the way. I truly believe that you can't improve without practice, and you aren't living life until you do something just a little bit uncomfortable. Just wanted to introduce myself and my ambitions for this project. I'm looking forward to getting started next week!
Posted by Emily B. at 9:11 AM 1 comment: